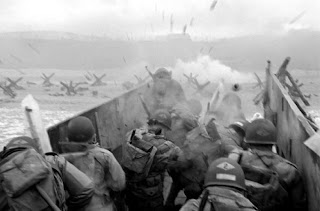 As I was writing my June 4 post about the Battle of Midway, Torpedo 8, and the Douglas TBD, another similar failure to give our fighting men the best equipment came to mind. That was the famous (or infamous) Higgins boat, the main American landing craft of World War II. Basically a slab-sided, shallow-draft box, it was cheap to build and did the initial stages of its job -- moving troops from transports to the landing beach -- well enough. It was what happened once the Higgins boats actually scraped ashore that was brutal.

For the troops' only exit from the boat was a drop-down ramp at the bow. Theoretically, the soldiers then quickly ran onto the beach, formed up, and moved inland to engage the enemy.

Theory did not hold up on D-Day. The Higgins boats came ashore at Omaha Beach into the concentrated and very accurate fire of hundreds of German troops in prepared positions. As the bow ramps dropped, machine-gun fire poured directly in on the men, often killing whole platoons where they stood in the boats, before the ramps had even fully deployed. For a devastating re-enactment of that phenomenon, see the first 15 minutes of Saving Private Ryan. It's not for nothing that in that movie, Captain Miller tells his men to "clear those murder holes." That is, get out of the boat and down the ramp as fast as possible. Like the airmen at Midway who knew they were flying their TBD's to certain destruction, but climbed into their planes anyway, the Omaha Beach men knew they were going to be terribly vulnerable the moment that ramp began to drop, yet they went anyway.

Now, I'm sure that the Higgins boat's designers didn't set out to build a deathtrap. But what a colossal failure of imagination! What did they think was going to happen while that ramp was being lowered?

The fighting men of 1944 deserved better. And the fighting men of 2012 deserve the best we can give them now. What is the Higgins Boat of today? Let's hope our troops, sailors, and airmen don't have to find out the hard way.
Posted by Bob at 10:09 PM