Thinking about Jesus' death on this Good Friday 2013, I noticed something that I hadn't considered before. Powerful Jewish voices in Jerusalem had decided that He had to die for blasphemy. If Jesus had come some centuries before He actually did, during one of the periods when Israel was self-governing, the Jewish authorities would have had the power to deliver a death sentence and carry it out.

Had it happened that way, we in later ages would be tempted to think what a pity it was that Jesus hadn't had the protection of the law of some really high civilization — like Rome. Better, enlightened government (albeit a wee bit tyrannical) would have fixed it all, and saved Jesus from being stoned or otherwise dispatched by religious fanatics of his own country. Better, more enlightened government would have fixed everything.

But of course Jesus did die when Rome was fully in charge in Judea. And when the moment came for that very high, very sophisticated, very educated civilization to stand tall, to step in and keep the "barbarians" from slaughtering an innocent man, what happened? With all the advantages of the Roman Legions and the Roman Law at their backs, they caved. All the crowd had to do was threaten a little rioting, and Pilate scuttled back into his palace and sent the Son of God off to be crucified.

Too many moderns are still thinking that our contemporary Golgothas could be avoided if only government were bigger, more powerful, more pervasive, more thoroughly dominated by educated people — like... well, them.

National governments can't keep the lid on? Why, we'll just have world government! That'll do it! The same bureaucrats who've made such a hash of national government will somehow become wise and just, and brilliantly effective, when they can bring the blessings of better, more enlightened, more sophisticated, and above all more powerful government to the defense of the innocent. 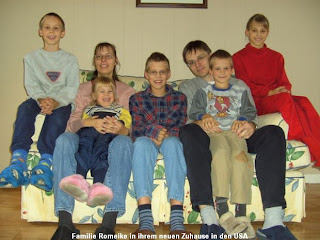 Apparently the Obama administration considers a family of evangelical Germans, who are in our country legally by court order, more of a threat to national security than the thousands of illegal immigrants it just released, according to this article at Human Events.

The administration has shown two things:

1) They don't like homeschooling in general because it irritates a key constituency, teachers' unions.

2) They really don't want to offend Germany right now, given that country's recent demand for the return of 300 tons of its gold reserves now "held" by the Federal Reserve.

Those little Scare Quotes are in order, I think, since the Fed also recently refused Germany's request for an audit of those reserves.

On the other hand, maybe I'm ignoring the natural reaction that Homeland Security personnel would have when confronted with such a scary-looking group of people.

The next Pope's name

Michael Cook at Mercatornet.com thinks it's most likely to be Leo or Gregory. He also gives you betting odds on many others, including "Elvis." Yes, "Elvis."

MercatorNet: Moving forward: what name will the next Pope choose?: