Wisdom from a box top

Someone just told me about the epiphany he experienced in his Christian life when, looking idly down at the top of a Cheerios box while getting breakfast, his attention was suddenly seized by these simple words:

Must be present to win.

It seems to me that that is the simple thing that God asks of us: be present to Me. Pray, and when you do, trust Me enough not to dwell on the past or worry about what might happen tomorrow. Just be here with Me now.
Posted by Bob at 12:58 PM Links to this post 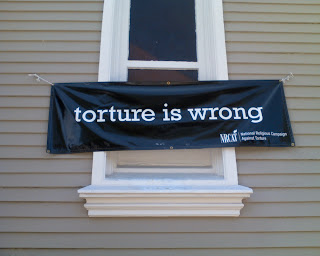 This banner first went up above the main entrance to St. Thomas Aquinas back in the middle of last year. There was a bit of argument about it when it was proposed by our three-church parish's Human Concerns Committee; I was among those who objected that putting up a banner about torture exclusively would send a message that this was the main moral issue for the Catholic Church right now (and send an unmistakable political message in an election year in which waterboarding was already a live campaign issue for one party). After the one month of visibility that this banner was said to be limited to, I suggested that we should follow up with a series of similar banners on other and more important moral issues: "abortion is wrong", "embryonic stem cell research is wrong", "euthanasia is wrong", and so forth.

One response I received from someone associated with the HCC (I won't name the person because the email was private communication) was "... if the issue were to be "euthanasia", "embryonic cell research" or even "death penalty", it would be so controversial that the parish may never come to a consensus to declare one way or another."

This spoke volumes to me about the degree to which 60's-style dissidence has soaked into Catholic life here in Palo Alto. Catechesis and apologetics have apparently been so poor for so long that simply stating the Church's longstanding, unequivocal positions about euthanasia and embryonic stem cell research would be hopelessly controversial. The Church regards both these acts as intrinsically evil, and thus never permissible. (The morality of the death penalty remains a prudential judgment about which Catholics may disagree and still remain faithful sons and daughters of the Church; the other two are not prudential judgments, but settled doctrine which command our obedience).

The banner first went up, as I said, back in the middle of last year -- June, I think, so it had to be taken down each time there was a wedding at STA, brides being understandably sensitive about having the torture issue shoved in their faces on their special day. At month's end the banner went away, and I pretty much let the incident slide into the past.

And then, walking down Waverley Street toward the church on Corpus Christi last Sunday, I looked up and there it was again -- this time hung crookedly across one of windows as you see above, secured to two big screw eyes driven into the 108-year-old redwood siding.

I'll keep you posted on developments.
Posted by Bob at 4:34 PM Links to this post