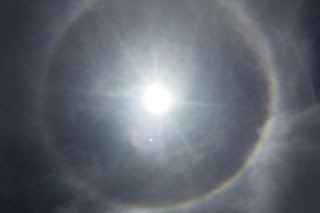 CNS reports quite a bit of chatter about a "small miracle" that occurred during the beatification Mass for Archbishop Romero in San Salvador recently: the appearance of a halo around the sun. I understand the excitement this must have called forth among those who had gathered to honor Romero, but attributing it to a miracle, even a small one, exposes both the Church and the Faith to ridicule.

That's because such solar halos are actually quite common throughout the year and can be seen from any latitude. They're caused by ice crystals in the upper atmosphere. Remember, no matter how warm it is down where we're standing, including in Central America, the atmosphere gets very cold above 10,000 feet. Those ice crystals can happen anywhere, anytime.

I have no more idea than you do whether the presence of a solar halo observed at this time and place was miraculous. It may have been. It may not have been. We'll have to wait until we can ask God face-to-face.

My concern is that being even a little too free to introduce the possibility of a miracle in a case like this can backfire. Unbelievers will likely immediately call to mind the last time when they heard about some miraculous claim that was debunked either as a misunderstanding of a natural phenomenon, or an outright fraud. Think of all those natural markings on trees, walls, and so forth in which some have claimed to see the face of Jesus or Mary.

Romero should be remembered for his deeds. If those who were there that day wish to deepen their experience by believing that the timing of the halo was too unlikely to be completely natural, no harm is done. I just think they ought to do so quietly, inwardly—where it counts the most, anyway.
Posted by Bob at 3:59 PM Links to this post