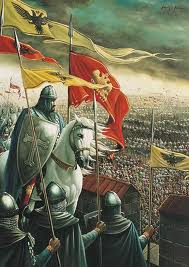 Five hundred and fifty-nine years ago on this date, the sun rose for the first time on Islamic banners dotting the walls of Constantinople, today's Istanbul. For the previous thousand years, since its founding, none but Christian flags had ever flown there.

Since the battle of Manzikert almost 400 years before, Turkish armies had steadily chewed away at the Byzantine Empire's lands, first to the east, and then, crossing the Aegean, west to the Greek mainland. In 1453. Sultan Mehmet assembled his forces outside the city and demanded its submission. Defending the city was hopeless from the start. After a short but grim seige, Sultan Mehmet's army finally broke through the outermost walls and overwhelmed the city's few remaining defenders.

The latter included the last Emperor of the Eastern Roman Empire, Constantine XI Palaeologos. When all was lost, he could have escaped to the Christian ships in the harbor, or surrendered confidently to Mehmet's troops, who had strict orders not to harm him. Instead, he tore the royal insignia from his clothing so he couldn't be identified, and according to horrified eyewitnesses in his retinue, charged into a nearby crowd of exultant Turkish warriors. He was never seen again.
Posted by Bob at 2:48 PM Links to this post

Email ThisBlogThis!Share to TwitterShare to FacebookShare to Pinterest
Labels: catholicism

The House's most prominent Democrat continues to pretend she's an "ardent practicing Catholic" -- and gets away with it:

Would it be so un-pastoral to issue a statement explaining how Ms. Pelosi has already excommunicated herself latae sententiae quite some time ago?
Posted by Bob at 1:16 AM Links to this post