Next time you're in California... 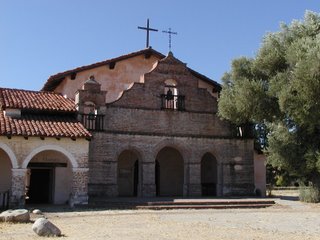 ... you absolutely have to visit this mission if you can. Because unlike most of the California missions, this one is a time machine.

This is Mission San Antonio de Padua, in the remote hills of central California, maybe 100 miles south of San Jose. The Spanish missions were connected by a road called El Camino Real (i.e. The Royal Road), and today's Highway 101 -- one of the main north-south routes in the state -- usually follows its path. So most of the missions are right along the busy interstate, or surrounded by the towns that grew up around most of them. Well restored in most cases, but when you're there you have no doubt you're still in the 21st century.

Not San Antonio. It's in the middle of nowhere, because when Hwy. 101 was laid out, it took a different, easier route, about 15 miles farther inland. To get there, you take Jolon Road from near King City, which follows the old route of El Camino, winding past a few lonely ranches and seeing very very few other cars. It's a beautiful, quiet drive.

The mission is all the more isolated because it's on the grounds of Fort Hunter Liggett, an Army training base which is mostly just open, untouched land. So to actually get to it, you have to show your driver's license, registration, and insurance card to the courteous but obviously armed guard at the gate, who takes those things, goes back into his hut and (I sure hope) makes certain you haven't been sending money to Hezbollah lately, and then comes back with your pass.

The base headquarters disappears behind you, and a little farther down the road, you come to the mission. You pull up in front, switch off the ignition, get out and shut the door. And then you hear it:

Not a sound of the modern world. Probably not another visitor, either. Just you and the padres' pride and joy, baking there in the afternoon sun with that glorious California summer scent of hot dry grass and oaks and evergreens. Look around you, and all you'll see is the same golden brown hills they saw. You'll have a sense of the immense sacrifice they made to come to this wilderness and bring the Faith with them.

If there's a caretaker, he's not in evidence, yet everything is wide open, reminiscent of those days, only yesterday, when pretty much everyone left their doors unlocked.

You might wander into the dim and peaceful sanctuary: 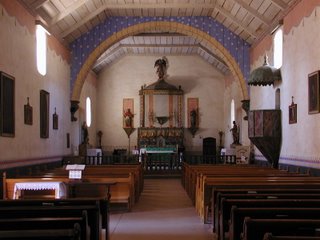 or maybe pause at this luminous side chapel: 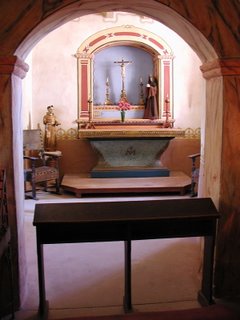 but when you leave, you'll know you've been in not just another place, but in a little private hidden corner where another time is still there to be savored.
Posted by Bob at 12:20 AM Links to this post

Most of the rank and file were devout, self-denying, and upright, but a crust of politically covetous, worldly, and cynical prelates had weakened and degraded the dignity and influence of organised Christianity.

Thus Winston Churchill, in his History of the English-Speaking Peoples, on the state of the Catholic Church in France on the eve of the Revolution.

But it's also a pretty good description of the Catholic Church in America, don't you think? Though much demoralized and often misled, the laity are still often surprisingly devout; but the Weaklands and Lynches and Laws and Mahonys and Gumbletons have indeed weakened and degraded the influence that the Catholic Church might have brought to bear on the rotten culture around us.
Posted by Bob at 11:09 PM Links to this post

Something made me think of a quotation I'd heard years ago, and so, like any good netizen, of course I googled what I could recall of it. I duly was presented with a few hundred hits, but in reading the summaries I noticed that part of the quotation as cited in the majority of hits was strangely different from what I remembered. And so I got a useful reminder of how risky it can be to rely on that first screen of Google hits.

Truth lies within a little and certain compass, but error is immense.

It's by Henry St. John, 1st Viscount Bolingbroke, writing ca. 1716. The first time I read it, many years ago, I loved it for the way it just sticks it to relativism. Hey, bub, there aren't many dissimilar truths about a thing; there is one, and it's closely circumscribed, and you can know what it is if you try hard enough. The vast remainder of what else you might say about the thing are not other truths, or "true for you but not for me"; they're just wrong.

But a funny thing happened to this fine sentence on its way to the web; on website after website that I checked out, it had turned into:

Truth lies within a little uncertain compass, but error is immense.

Just a few letters of difference, but what a change. Now the compass in which truth is to be found is no longer certain; gone is the author's confident assurance that we can know that compass, and the limits of what is true about a thing. We're still told that error is immense, but we can't be sure just where the truth is.

How did this change happen, so that it could be strewn all over the web? I think I can guess.

I suspect that whoever first goofed it up only heard the quotation, and never read it. And the speaker he was listening to slurred the "and" into the sloppy " 'n' " you hear all the time. My imagined listener parsed the " 'n' certain " he had heard into "uncertain", then wrote it down feverishly into his notebook or PDA or laptop, and without checking, or even reading his corrupt version carefully and realizing that it doesn't really make sense with the change, threw it up onto his website. And as things do on the web, it was picked up by one person after another who never checked it, and just trustingly repeated it -- also without noticing that it really didn't make sense.

So the search for truth hasn't really changed much. Centuries ago, when news traveled largely by word of mouth, you knew you couldn't trust everyone, and you honed the skills by which you could tell a reliable person from a rumor-mongering halfwit.

Now, after enormous technological change and the invention of the greatest information-gathering tool ever known, we're still right where we always were: trying to tell the reliable witness from the halfwit, and keep our inheritance of wisdom from morphing into gibberish.
Posted by Bob at 10:31 PM Links to this post 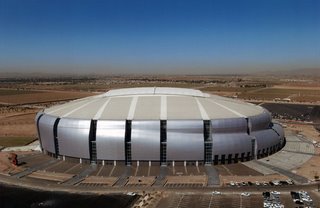 From the architects of the new cathedral in Phoenix:

"This distinctive shape has two iconic relationships -- one to the Native American mandala form, ... and two to the barrel cactus form that is indigenous to the area."

OK, I'm lying. This is the new stadium of the Arizona Cardinals football team.

But given some of the absurd Catholic churches that have been built in the past thirty years, wasn't it believable for just a second that this structure was indeed a new cathedral? And weren't the architects' comments above reminiscent of the pretentious cant that we've often had to endure as money was wasted on yet another monstrosity?
Posted by Bob at 9:31 PM Links to this post

After twenty-two years of marriage, you'd think I'd have learned to ask my wife about things. Perhaps this is why I'm in the casa del perro so often.

I knew that she had spent six months living with a Catalan family in Castellon de la Plana back in our college days, but did I think of asking her first whether she had ever heard the valediction "May no new thing arise" (que no hayan novedades) when she was there? No.

Turns out she had not. I suppose that if that fine little phrase is genuine at all (which I'm quite uncertain about at this point, though I'm sure hoping it is), it may have simply fallen out of fashion -- perhaps just as the once-universal complimentary close "your humble and obedient servant" disappeared from English letters by the late 1800's. Or maybe it was always more of a Castilian than a Catalan thing.

Interestingly, though, she also told me that novedades, which is translated "new thing" in the O'Brian novels, is more properly translated as "novelties." You know, as in "new and improved." So the valediction really means something more like "May no New Coke* arise."

Now that's a wish I can wholeheartedly agree with.


* For those who are too young to remember, about 25 years ago the Coca-Cola folks tried to replace their flagship time-tested favorite soda with some glop their marketeers dreamed up, which they called New Coke. Disaster ensued. It lasted only a few weeks, until they shamefacedly brought back the formula everyone loved, as Classic Coke. As far as I can tell, New Coke was taken out back and shot, probably together with the marketeers.
Posted by Bob at 8:48 PM Links to this post

"May no new thing arise"

That wish (scroll down if you follow the link) -- used throughout Patrick O'Brian's seafaring novels by his Irish-Catalan ship's surgeon, Stephen Maturin, and purportedly a traditional Spanish (or perhaps Catalan) parting remark, much as we might say "see you later" -- sums up my attitude much of the time.

I'm not a Luddite or a complete traditionalist. There's my iPod right here on my desk, to prove it. But the world is awash in stuff that claims to be new and improved but so often is really just different, and worse. That certainly goes for my Catholic Church, where so much of the change of the past forty years has been sheer careless novelty.

The next time I hear someone piously say, "The only constant is change," there's going to be trouble. The only reason change may sometimes seem constant is that too few people say "you got another thing comin', bub." Or if I'm unexpectedly touched by grace, maybe I'll just say...

Que no hayan novedades.
Posted by Bob at 11:00 AM Links to this post