Not one Catholic priest or bishop was invited to give any prayer or invocation at Mr. Obama's inauguration.

Hey, you 53% of American Catholics who voted for him: how do you like your reward?
Posted by Bob at 9:58 PM Links to this post

And so it goes

Well, since so many Catholic schools ceased being distinctively Catholic years ago, this shouldn't come as a surprise. Why go to a Catholic school when it has reallybecome just a public school named after a saint? When the salt has lost its savor, it is good for nothing but to be thrown out and trodden underfoot.

The mainstream Catholic misinterpretations of Vatican II continue to wash the Church in America into bland irrelevance. Why should the secularists bother persecuting it? It's slowly killing itself anyway.
Posted by Bob at 9:43 PM Links to this post

The violent bear it away

So Joe Biden, newly-minted VP, self-described faithful Catholic, and staunch defender of a woman's right to murder her child (as long as he/she hasn't been born yet) in open defiance of clear Catholic teaching, gets a nice standing ovation and Holy Communion, to boot, at Washington's Holy Trinity Church shortly before the inauguration. Bishop Wuerl: silent as the non-existent graves of the 2,500 American children who were aborted today.

The AP story also mentioned that it was also at Holy Trinity that John Kennedy heard Mass just before his inauguration in 1961. Very appropriate, though not for the sentimental reason the writer probably meant. Appropriate because Kennedy pioneered the abandonment of Catholic moral teaching to achieve high public office.
Posted by Bob at 9:27 PM Links to this post

"Read nothing before Vatican II"

From the online Our Sunday Visitor recently:

Q. My husband is in the process of making his confirmation, and I am accompanying him to his classes each Sunday. We are disturbed about some of the teachings taking place. For instance, today we were told that confession does not need to be done frequently and we do not need to confess in order to receive Communion.

OSV's answer was forthright and correct: esentially that what they were being told was a crock. Read the whole answer here. If the link doesn't work, look on the OSV site for the "Question of the Day" feature for January 7.

What lies are peddled in some RCIA classes now!
Posted by Bob at 5:56 PM Links to this post 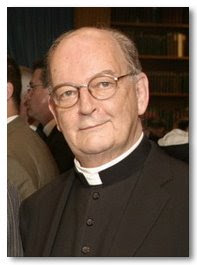 Father Richard John Neuhaus has died. I had no idea he was even ill.

In a season full of blows to the prospects of the cultural and religious renewal I've hoped for, now this comes.

First Things magazine was a big part of what got me headed back to the Catholic Church in the 1990's. Joe Bottum will do a good job as editor, but he won't be Fr. Neuhaus. No one will be.

He was quite a champion. I met him once, at the 1998 C. S. Lewis Foundation's conference in Cambridge, England. Just asked him a question after his talk, about how to nudge the big Protestant church I was then attending toward a pro-life position. He was every bit as gracious and witty in person, extempore to a perfect stranger, as he was in print to the public at large.

Go with God, Fr. Neuhaus. Everything is ready now.
Posted by Bob at 10:35 AM Links to this post