'Dagger John', we need you! 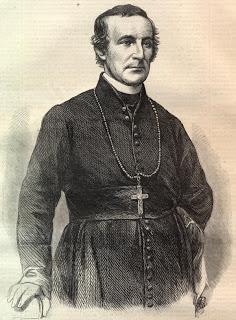 This man is 'Dagger John' Hughes, the Irish-born first Archbishop of New York. Karen Hall's blistering post, [Update: sadly, Karen Hall's wonderful blog, Some Have Hats, disappeared a couple of years after I wrote this] about the way Bill Donohue of the Catholic League has been nearly alone among prominent Catholics condemning the vile remarks of John Edwards' blogger staffers, brought him to mind. Besides other small achievements, like leading a moral and cultural rebirth among his city's Irish immigrants and getting the parochial school system off the ground in the U.S., he didn't take guff from any Catholic-hater. He earned his sobriquet not only from the cross he wrote after every signature (resembling the printers' symbol known as a dagger), but also from the devastating writings and speeches by which he countered the hysterical anti-Catholicism of his own day. Here's a snippet from a long but well-written article about him:

In 1829, for instance, outraged by an editorial in a Protestant religious newspaper about “traitorous popery,” he fired off a missive to its editorial board of Protestant ministers, calling them “the clerical scum of the Country.” During the 1834 cholera epidemic in Philadelphia, which nativists blamed on Irish immigrants, Hughes worked tirelessly among the sick and dying, while many Protestant ministers fled the city to escape infection. After the disease subsided, Hughes wrote the U.S. Gazette that Protestant ministers were “remarkable for their pastoral solicitude, so long as the flock is healthy, the pastures pleasant, and the fleece lubricant, abandoning their post when disease begins to spread dissolution in the fold.” He pointed to the work of the Catholic Sisters of Charity, who had cared for cholera victims without regard for their own safety, and wondered where all the people who spoke about perversion in the convents had gone during the epidemic.

Wow. Now that's how a bishop should strike back to defend his Faith and his flock!

So, Dagger John, pray for us, and ask Our Lord to send us another one like you. Really, really soon.
Posted by Bob at 11:17 PM