Due to the current medical emergency, the state government here in California has issued a "Shelter at Home" order which keeps citizens from leaving their homes for any reasons other than those it identifies as essential, e.g., buying food and household goods, visiting the doctor, fueling up the car. All of these have to do with sustaining physical life.

That's fine, but Catholics have a right to ask: what about sustaining our spiritual health?

Most of the bishops of California reacted to earlier, more limited restrictions by immediately canceling all public Masses, the hearing of confessions, and most of the other sacraments. There wasn't an audible peep of protest that the spiritual care of their flocks deserved a reasonable exception, such as has been carved out for ... wait for it ... gardening services. A few commendable prelates like Archbishop Cordileone of San Francisco held out as long as they could, keeping the churches open and the sacraments continuing, until the Governor's most recent edict of March 19 made the point moot by forbidding California's Catholics from traveling to Mass at all. At that point, the state declared to the bishops, effectively, "Thanks, but the Catholic faith is irrelevant to people's wellbeing" to which most bishops replied, "Yeah, I guess it is. OK, we're shutting down."

The consecrated leaders of the One True Faith — the Faith that has preached from the beginning that our eyes should be fixed not on the life of this world which passes away, but upon the vision of eternal life in Heaven — suddenly withdrew the Mass and the Sacraments from their flocks. The Real Presence can't be met in person now, but only through streaming video, it seems.

The Faithful will now face this terrible Lent without the uniquely Catholic spiritual lifelines for which earlier generations braved "dungeon, fire, and sword." And it appears that if the state extends the Shelter in Place order through the end of April, this Lent will not even have its rightful conclusion in the mysteries of Holy Week and the triumph of Easter.

The Faith isn't irrelevant, dear Bishops; but most of you are.
Posted by Bob at 11:49 PM

It's human nature to put off visiting a place you've always wanted to see. After all, it'll still be there next year, won't it? 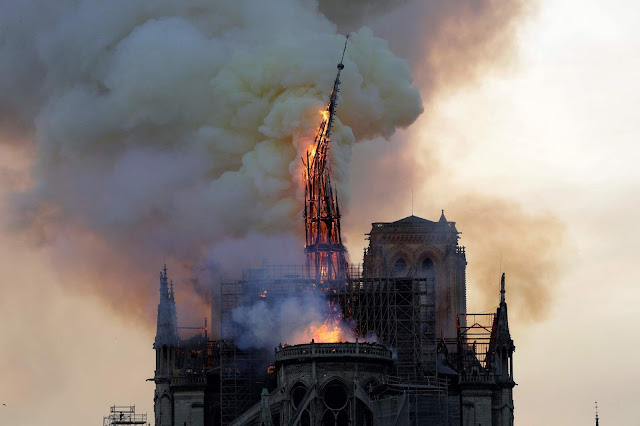 In that memorable series Band of Brothers, we saw the following exchange:

If you didn't see the show or read the book on which it was based, you need to know that Major Winters and Captain Sobel have no reason to like each other. In Winters' case, there is legitimate grievance for shabby treatment at Sobel's hands when he was a lowly private in Sobel's unit. In Sobel's case, there is resentment and envy of Winters' steady and deserved promotion to a rank surpassing his own.

That's the background behind Sobel's initial dodging of his duty to salute Winters, seen here. He does so because he forgets the truth that Winters reminds him of: that the salute's message of respect is to the rank of the superior officer. It is not a commendation of the man holding the rank. (Nor is Winters demanding a demeaning gesture now that he's above Sobel on the Army's status ladder; he always carefully saluted Sobel when the latter was persecuting him earlier in the narrative).

And now to the application.

In the Catholic Church today, we're daily faced with the knowledge that some very very unworthy men now hold high rank in the hierarchy of the Church. They are doing and saying things that are contrary to the Deposit of Faith and are leading many souls astray. In short, they're not doing their duty; one could even say they are aiding and abetting the enemy. That would be The Enemy.

Those of us who excoriate such behavior are right to do so. Their brother bishops usually won't correct each other, so the laity must stand up to point out sin and error when the men who should be doing it shrink back. Otherwise sin and error win in a walkover, and I'm pretty sure God doesn't want that.

But let's make it clear that we are never unwilling to "salute the rank" at the same time. Infuriating as they are, and as much as their high rank makes their misdeeds all the worse, they have to be addressed as holders of great offices which deserve respectful address -- unless we want to go down the route of the Protestants of the 16th century, who let their outrage at clerical sin lead them to pull up the wheat with the tares.
Posted by Bob at 12:49 PM

On the Australian hierarchy's CathNews website we learn that legalizing abortion is being proposed there, so how is Brisbane's Archbishop Mark Coleridge marshaling his flock? He counsels them to avoid adopting "divisive tactics such as gruesome images and descriptions of abortion." Instead, he wants them to be "sensitive." He thinks that the strong division of opinion here in the United States over abortion laws has no place in Australia.

Too bad for Australia, then.

Archbishop Coleridge thinks our outrage over the slaughter of children in the womb is "ideological" and therefore bad. Even if what he disdains as ideology is merely the plain unchanging teaching of the very Catholic Church in which he occupies a position of leadership.

And therefore he says:

“I don’t see myself as an ideological warrior riding into battle to defeat the forces of darkness.”

Well, if you don't see abortion as part of the platform of the forces of darkness, Archbishop, you deny the teaching of the Church that calls it intrinsically evil.

And if you don't see yourself as a warrior riding into battle to defeat those forces of darkness, sacrificing everything if need be, you have no business being a Bishop, let alone an Archbishop.

Have the decency to resign, and go get an ordinary job that doesn't demand -- yes, demand! -- that you ride into that battle joyfully every day.

I used to believe that Australians were a brave and forthright bunch because I grew up on movies like The Lighthorsemen and Breaker Morant, and on books about that tenacious stand on the Kokoda Trail in 1942. But when I see that Oz now honors men who don't want to fight as hard as they can for what's right, I begin to suspect that times have changed.
Posted by Bob at 12:07 PM

Someone I know uses the following as part of his/her email signature:


“If one has the answers to all the questions – that is the proof
that God is not with him.

It means that he is a false prophet using religion for himself.
The great leaders of the people of God, like Moses, have always
left room for doubt.”

The person quoted is Pope Francis. The source is America, the dissident Jesuit magazine, from 2013.

This is the same Pope who appears to pay no attention to any doubts expressed about his own off-the-cuff verbal meanderings, nor to repeated requests for clarification of his vague statements in Amoris Laetitia, even when those with questions are Cardinals of the Church who have submitted their dubia officially to him as Canon law allows. Not even the courtesy of a genuine reply. Just a remark, months later, that the interpretation formulated by a group of South American bishops was the correct one, without even mentioning the patiently doubting Cardinals.

This is the same Pope who attacks as "rigid" those who wish to celebrate the Tridentine Mass, or who take Catholic morality seriously enough to put up a real struggle with temptation (and encourage others to do the same). No room for their doubts about the shabby irreverence of contemporary Catholic worship. C'mon, people, have the right doubts, and then everything will be cool!

Did "the great leaders of the people of God, like Moses," really leave much room for doubt? When was that exactly, Your Holiness? I seem to recall that Moses was not leaving much room for doubt when he came down from Sinai and found that "the people of God" had turned to idolatry and vice while he was away receiving the Ten Commandments. I seem to recall something about throwing down the stone tablets in fury. Did Jesus Himself leave tons of wiggle room when He said, "Apart from me, you can do nothing?" Or "I am the Way, the Truth, and the Life?" (No ambiguous sentences seeming to leave the door open to worthwhile things that Astarte or Isis or Aphrodite might have to offer the human race in His place.)

Francis here gives us another round of the same game that we've become so familiar with since 2013: invent a straw man and then revel in destroying it. After all, just who was claiming to have all the answers, relying on his own authority rather than on the Faith as it has been passed down to us?
Posted by Bob at 4:48 PM

Another good statement from Francis, but...

In trying to look only at what Pope Francis says and does, instead of trying to look into his heart and judge his overall character (a vain pursuit, no matter who's the subject), I have to commend him for his recent remarks to the Italian family group Forum delle Famiglie.

In these off-the-cuff statements, he called abortion "white-glove" Nazism, referring to the Third Reich's eugenics programs. This is surprising for two reasons: first, it's usually when he speaks off-the-cuff that he has made his most heterodox-sounding pronouncements, and this is very orthodox indeed; second, because in pointing out the parallel between that earlier eugenics based on race and today's eugenics based on personal preference, he said something stronger than most anti-abortion activists have heretofore felt comfortable saying.

I like Robert Royal's analysis at The Catholic Thing.
Posted by Bob at 1:01 PM

Cardinal Reinhard Marx is now fulminating against the Bavarian government’s move to place crosses on public buildings. He complains that such a display would create “division” and make some Germans uncomfortable.

It is about making people uncomfortable. In a way, nothing should make us more uncomfortable than the sight of a cross. The cross is a reminder of the way we treated God when He came in His Second Person, Jesus Christ, to save us. We took His love and threw it in His face. We beat Him. We killed Him. And after He rose from the dead and ascended into Heaven, we scorned His memory and disbelieved His disciples. What a sorry lot we are, says the Cross.

And not just first-century Jews and Romans, or later European Christians, or any other subset of humanity. Every person who ever lived or will live. All have fallen short of the glory of God, all have sinned, even those who have never heard the Gospel and have only the natural law to guide them.

So, Cardinal Marx: as the hymn says, "Lift high the cross." Or admit you just don't believe the whole thing and that you need to retire.
Posted by Bob at 11:00 AM